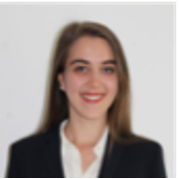 Maria Isabelle studied political sciences, law and European studies with a focus on gender and feminist foreign policy at the universities of Lucerne and Geneva respectively. Before taking over as director of Romandie in September 2018, she worked as an academic associate for the Swiss Embassy in Washington D.C and co-founded the foraus gender programme, which was launched in May 2017.